How is IQ measured? Average and high IQ meaning

IQ stands for intelligence quotient and in short, it is a measure of a person's intellectual abilities and potential.

A person's IQ score is not an isolated number. It represents how a person's results compare to those of other people in the same age.

All IQ scores follow a bell curve. The average IQ is 100 and is at the peak of the bell. The scores of most people are represented in the middle of the bell, between 85 and 115. 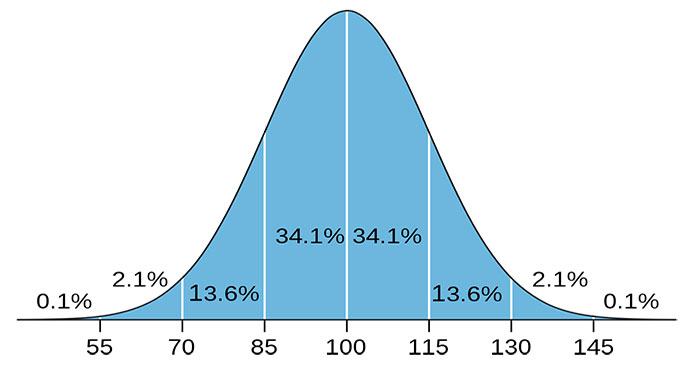 The classification of the results is as follows:

Around Sixty-eight percent of scores fall within one standard deviation of the mean (that is, between 85 and 115). That means that nearly 70% of all people score within plus or minus 15 points of the average score.

Around Ninety-five percent of scores fall within two standard deviations (between 70 and 130). Outliers beyond those points represent only a small portion of the population, which means that only a small percentage of people have a very low  (below 70) or a very high IQ (above 130).

Average IQ – what does it mean?

It means you have average reasoning and problem-solving skills. Your IQ score might be a good general indicator of your reasoning and problem-solving abilities, but many psychologists suggest that these tests don't tell the whole story. A few things they don't measure are practical skills and talents. You might have an average IQ score, but you might also be a great musician or artist. Researchers have also found that IQ scores can change over time.

High IQ – what does it mean?

It means you have above average reasoning and problem-solving skills. Studies suggest that people with higher IQ tend to have more chances to be better in school, job performance and be healthier in general. But not always.

Genius IQ – what does it mean?

Some high IQ individuals join a High IQ society. The most famous and largest is Mensa International, but many other more selective organizations also exist, including Intertel, Triple Nine Society, Prometheus Society, and Mega Society.

» What is IQ?
» Is IQ important?
» How to improve your IQ and brain function?